The buttock lift is not a rare operation in the field of aesthetic surgery, because, in most cultures, the appearance of the buttocks is of great importance.

For a successful correction of a sunken and flattened buttock, the surgeon must be familiar with the aesthetic standards of the buttocks.

The following three criteria are of crucial importance for the aesthetics of the buttocks:

If you draw a perpendicular and horizontal line through the middle of the buttocks, four quadrants are created which should ideally be about the same size. 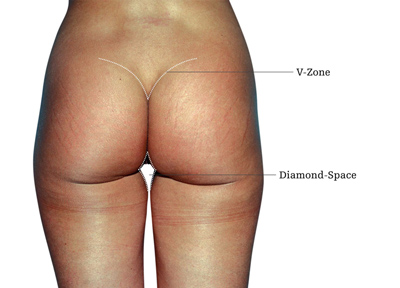 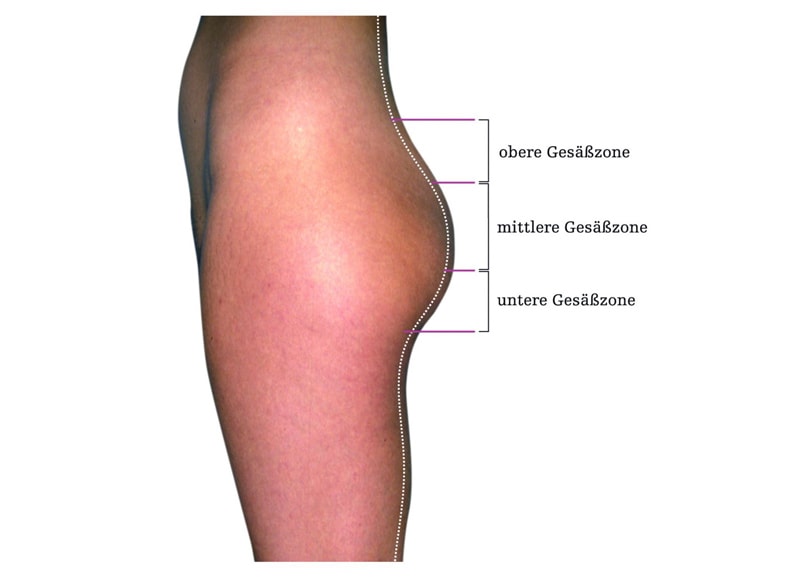 The gluteus maximus muscle takes up 80% of the buttocks area and is the main form-determining component of the buttocks. Its origin on the iliac blade and the sacral/tail bone has a long-distance and curved profile and forms with its vis-à-vis a big “V”, the so-called “V-Zone”. The deeper the indentation formed and the larger its surface, the more beautiful the buttocks is considered.

The inner edge of the gluteus maximus proceeds downwards and then curves outwards, and thus forms the gluteal fold. Ideally, the gluteal fold divides at 2/3 of its length, continues with an angle of 45 ° down to the thigh and forms together with the opposite fold a rhombus which is known in the literature as the Diamond-Space.

The buttock lift is technically mature and has little operational variations. After palpation of the origin of the gluteus maximus, the skin is cut and lifted from the muscle fascia. The predefined amount of lift corresponds to excess of skin that will be removed.

For a successful buttocks lifting, tightening the slack is not enough, it is necessary to provide for an aesthetic volume distribution as well. Therefore, it is often necessary to add volume in order to improve the contour in the upper buttock area. This can be achieved by a dermis flap, autologous fat transplantation or silicone implants.

BEFORE & AFTER PHOTOS BUTTOCK LIFT

Here you can see two examples of buttocks tightening. In Europe, this procedure is relatively rare compared to the US. The Buttock lift is usually performed together with a tummy tuck, this is called a body lift. 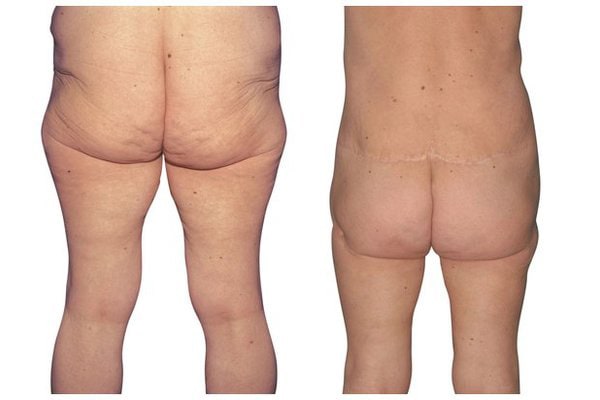 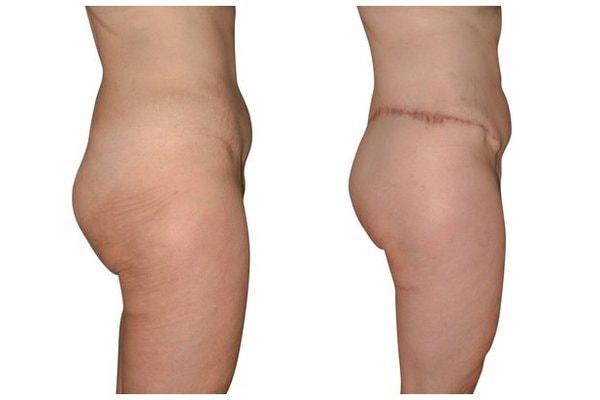 1. What methods of buttocks lifts are there?

There is only one method. At the upper edge of the buttocks a V-shaped skin incision is performed, the skin dissected to the muscle fascia, and the excess skin is brushed up and removed . In addition to the desired lift of the buttocks, form correction may also be done.

2. What are the methods of form correction?

Most often, it is necessary to add in volume in the upper buttock area. This can be achieved by dermis flaps, autologous fat transplantation or silicone implants.

3. Where is the scar of a buttock lift?

It runs v-shaped approximately at the level of the iliac crest from top lateral towards the bottom crease of the column and symmetrically opposite.

4. How long will the surgical outcome last?

If there are no massive weight fluctuations, the results last a long time. Gravity may cause the seat to drop again so you have to repeat the operation several years later.

5. Will insurance pay for the procedure?

The buttock lift is a purely aesthetic procedure and will therefore never be covered by health insurance.

6. Is general anesthesia used in a buttock lift?

An operation of this magnitude must be performed under general anesthesia.

7. How many nights must I stay in hospital?

In general, you must count on two to three nights stay in hospital.

8. What complications can occur?

9. When is one “operational” after a buttock lift?

After about 10 days. At home, during convalescence, the seated position should be avoided for a period of 14 days. In order to avoid pressure on the scar, one should lie on the stomach or side.

A buttock lift is performed in principle in an ISO-certified operating room in a hospital.

For a period of 14 days before the operation, anticoagulants (aspirin, Marcoumar, vitamin E, etc.) should be avoided as this can delay blood clotting. Also alcohol and sleeping pills should be avoided as far as possible, because they reduce the coagulating ability of the blood and thus increase the risk of bleeding. The consumption of cigarettes should be reduced to a minimum as much as possible. Nicotine has a vasoconstrictive effect, which can lead to impaired wound healing.

For surgery under general anesthesia, the following additional tests are necessary:

Please note that the test results may not be older than 10 days at the time of surgery. Please bring all the results for the procedure to the hospital.

Please come 2.5 hours BEFORE the procedure on the day of surgery to the hospital and sign in at the porter. After completing the admission formalities you will be placed in your room. On request, you will receive an infusion, which reduces your thirst.

When tightening the buttocks, please count on a hospital stay of one to three nights.

Enzyklopaedia Aesthetica, the patient guide for Aesthetic Surgery
Everything worth knowing about "Breast Augmentation".