Not infrequently, patients seek me for treatment of a double chin, whose cause is not flabby neck or increased fat, but rather a receding chin. It is fascinating that almost all respondents viewing simulation images do not recognize the manipulation of the chin and to the question, “Which nose do you like better?” , point to the image with the corrected chin, although the nose remains unchanged and only the chin was extended.

Click into the middle of the circle and move the slider from the left to the right. 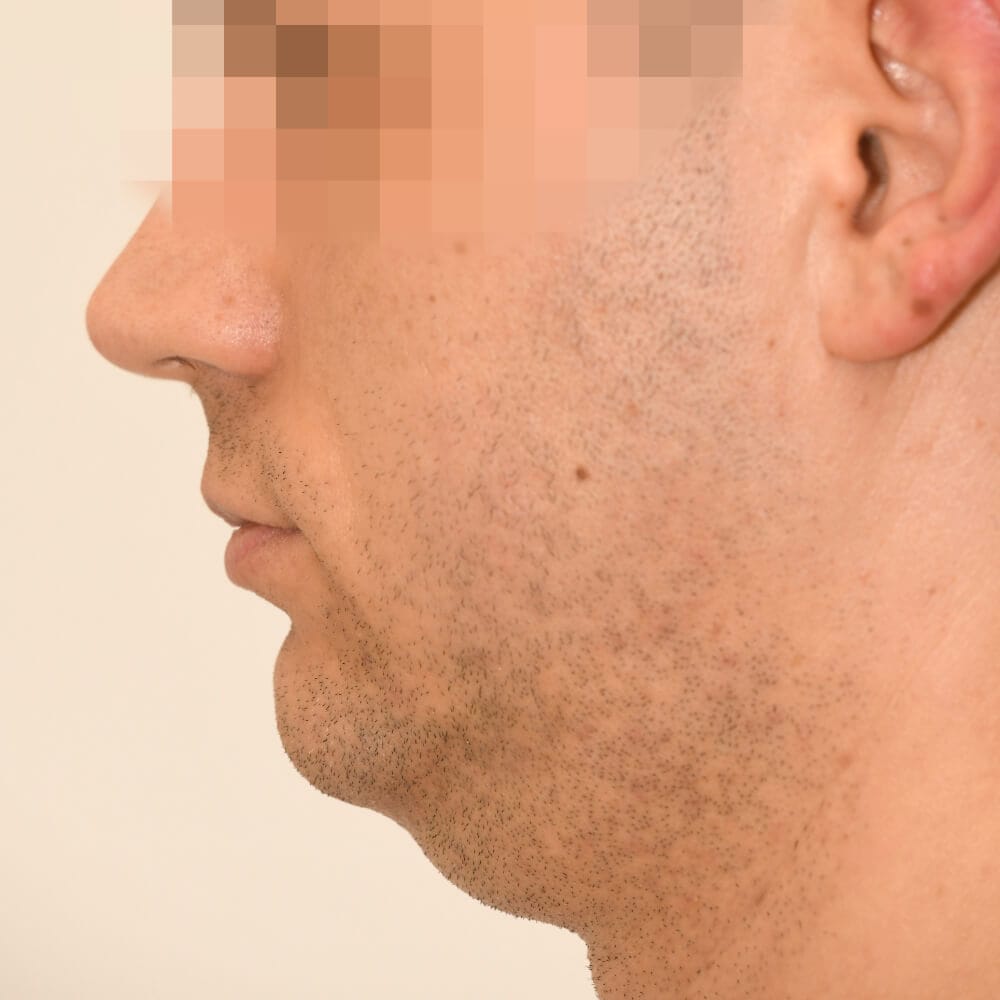 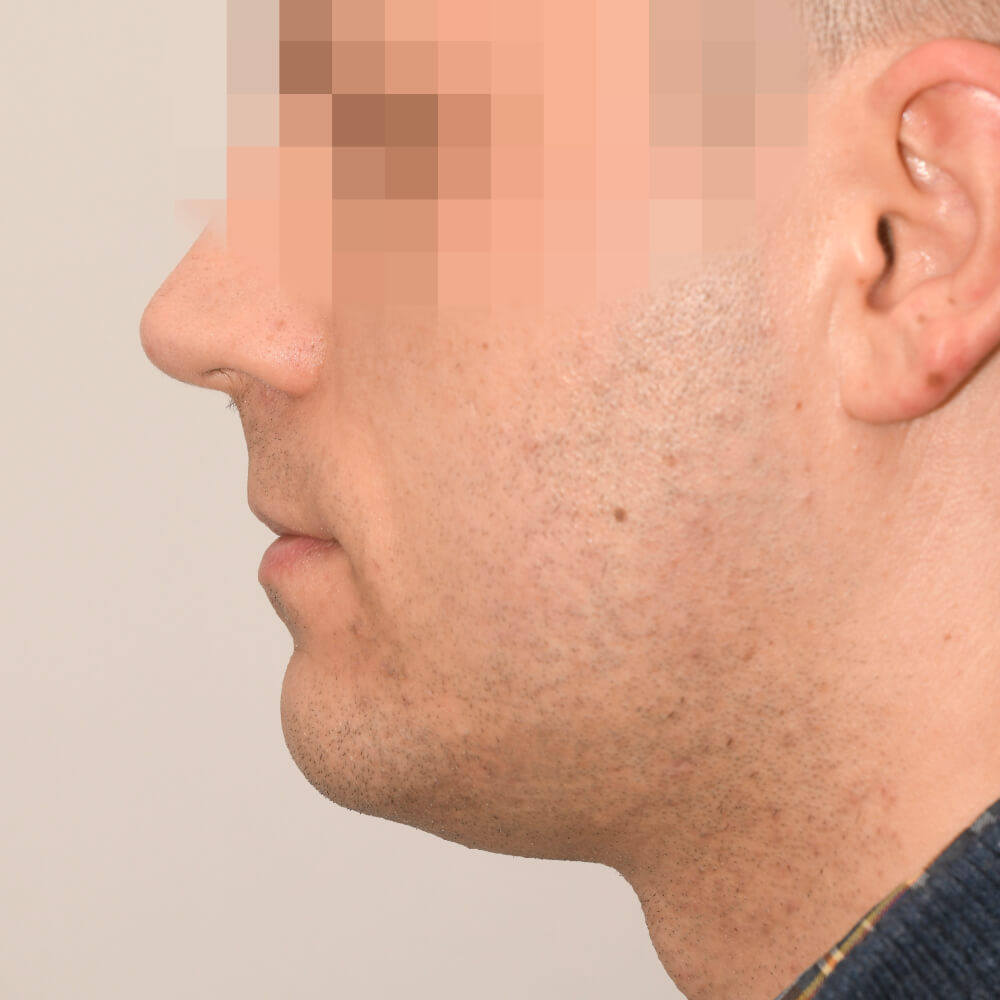 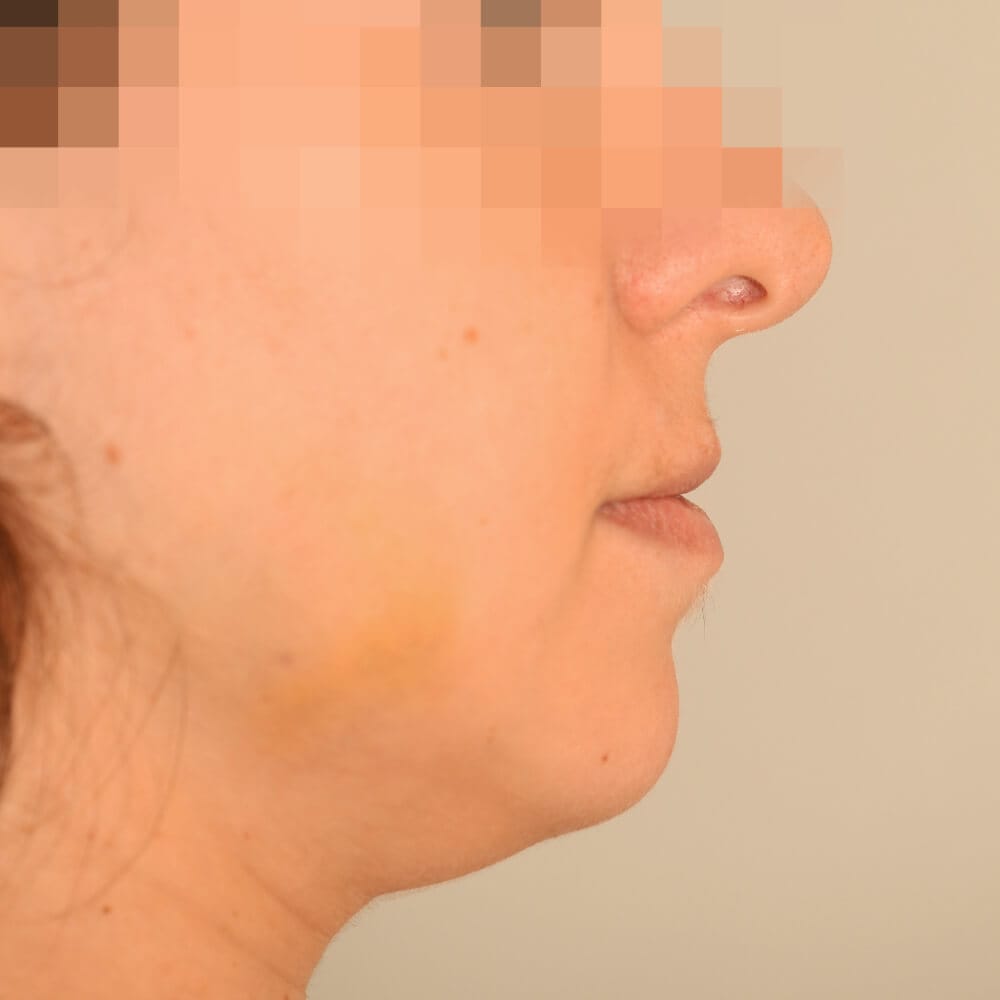 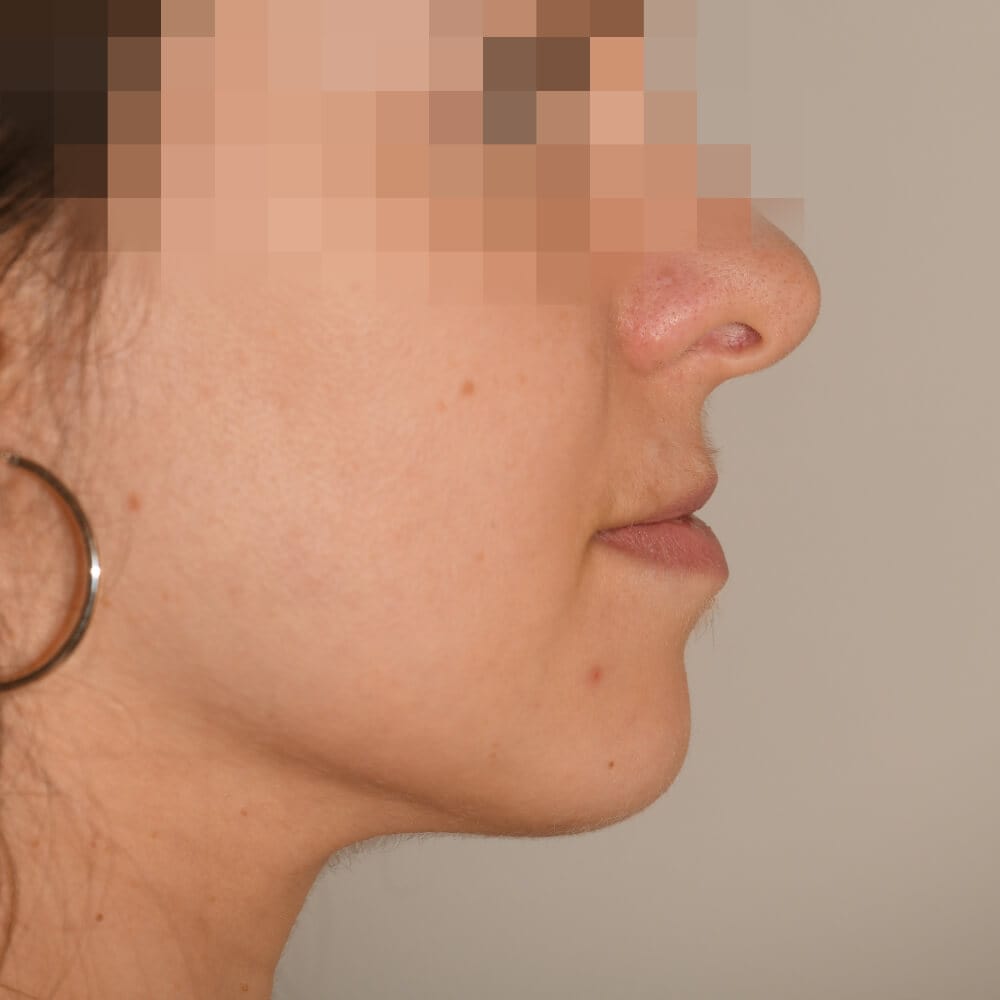 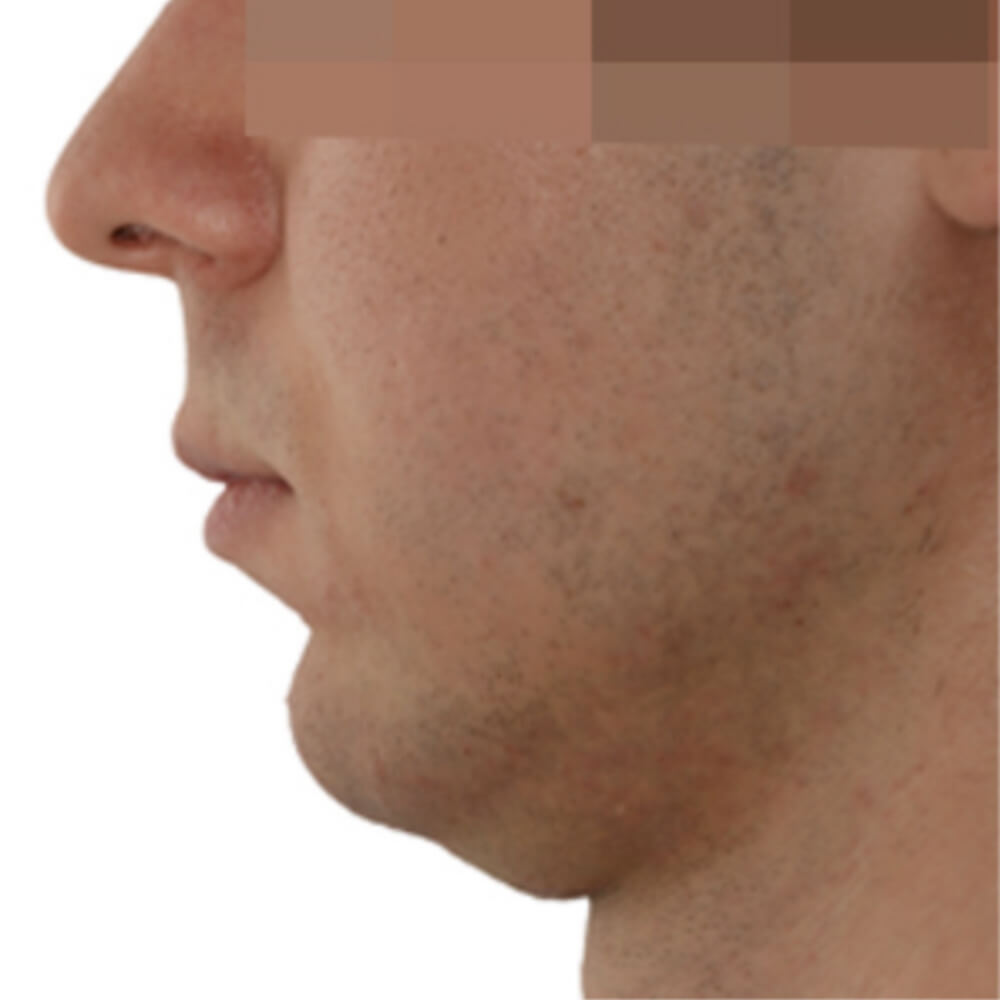 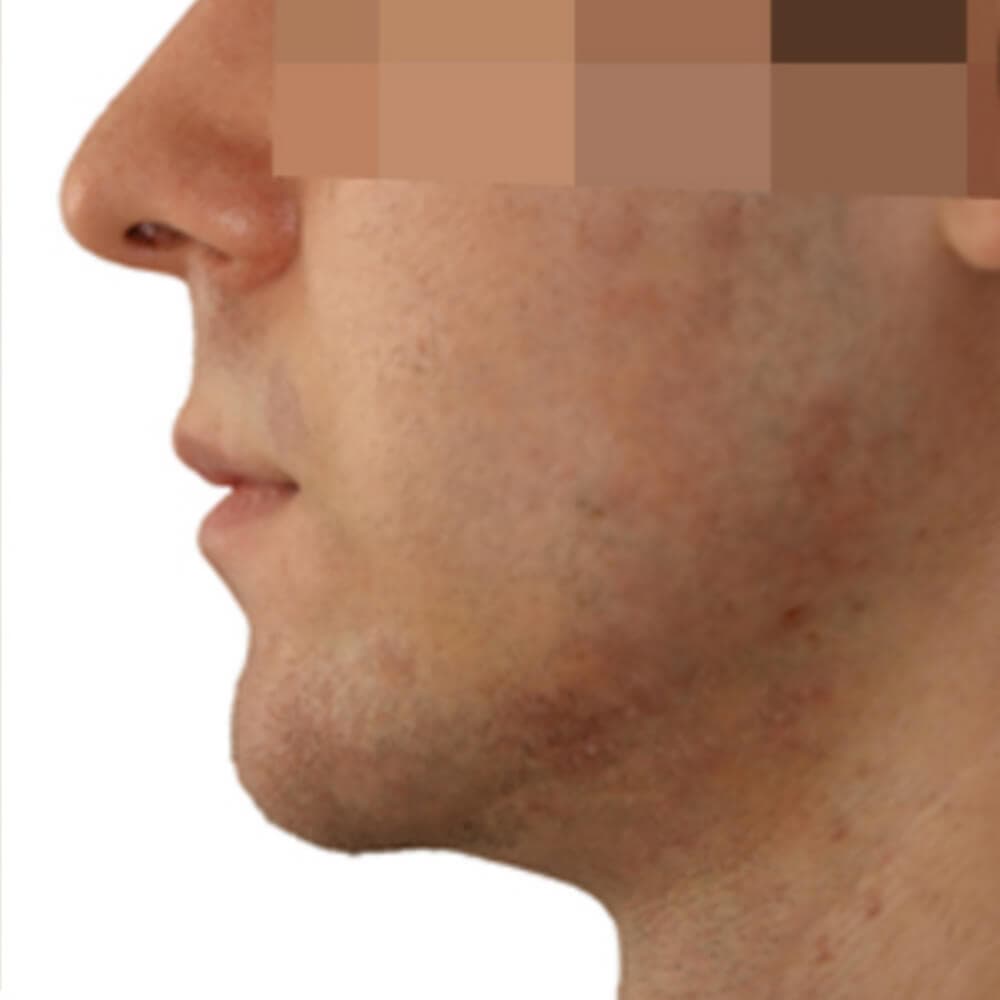 The length of the chin plays a crucial role in the harmonious picture of the face. Ideally, the most anterior point of the forehead and chin make a plane. If the chin is behind the line, one speaks of a receding chin, if it juts too far forward, one speak of a protruding chin. A receding chin makes the nose appear longer and larger. 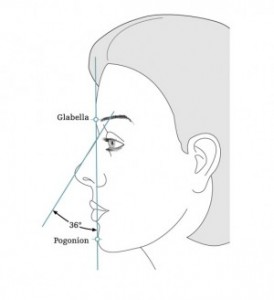 Most often I do chin corrections in conjunction with nose corrections, although for most patients the importance of the chin for facial harmony is completely unknown. This shows up again and again during the planning of a nose correction with a computer simulation program.

Eight out of ten patients with a receding chin preferred the computer simulation image with the chin extension significantly better than the simulation, in which only the corrected nose is shown. It is fascinating in particular that almost all respondents did not recognize the manipulation of the chin when considering the two simulation images, and when I asked, “What nose do you like better?” the image showing the corrected chin, while the nose is unchanged, is preferred. The same occurs when comparing profile pictures, with and without a preceding reduction of the chin.

Not infrequently, patients come to me because of a double chin. The cause is not however flaccid or increased neck fat, but a receding chin. The correction of the receding chin with simultaneous platysmal tightening, significantly improves both the profile of the face and the contour of the neck.

An extension of a receding chin will need to be performed, in mild and moderate cases (up to a deficit projection of about 10 – 12 mm) with a silicone implant; a more serious case requires orthodontic treatment. There are different chin implants, this way one can take into consideration individual face shapes (wide or narrow jaw, chin round or flat etc). Chin implants generally heal without any problems, and are not perceived as foreign.

A protruding chin may be milled or ground off in mild cases. In severe cases orthodontic care (transpositioning, plating, etc.) must be used.

The successful correction of a receding chin is for many patients an unexpected improvement. 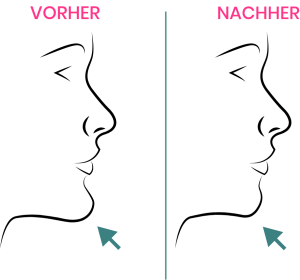 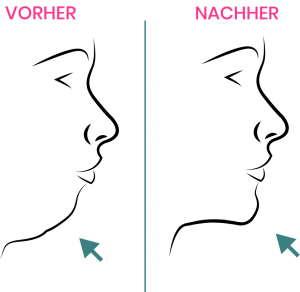 BEFORE & AFTER PHOTOS CHIN CORRECTION 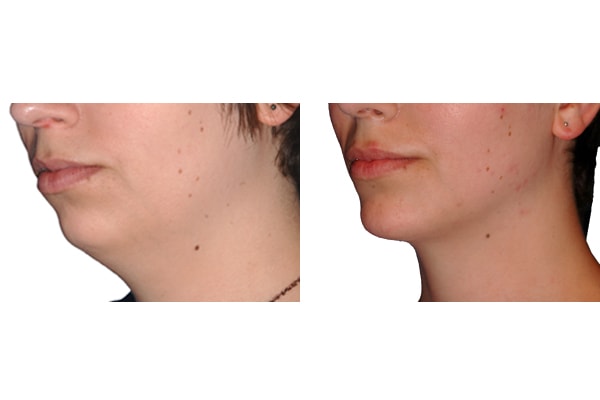 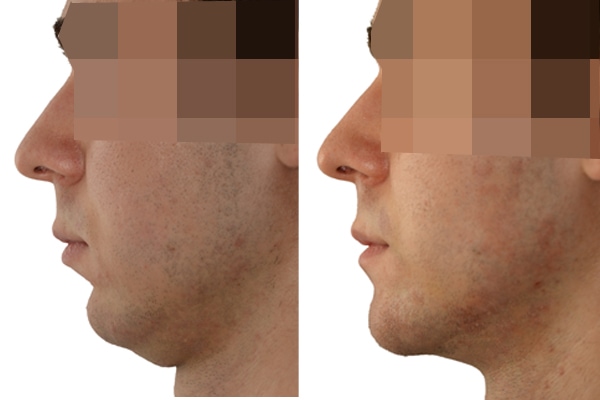 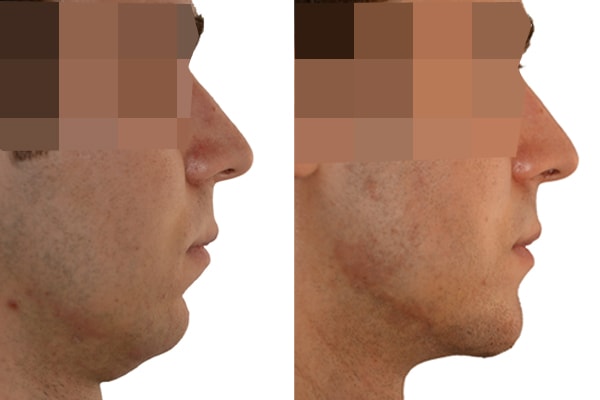 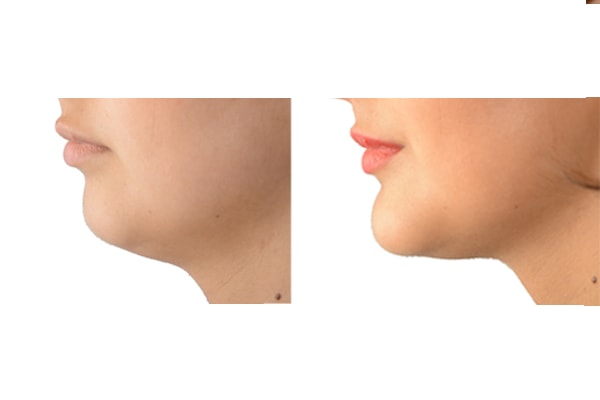 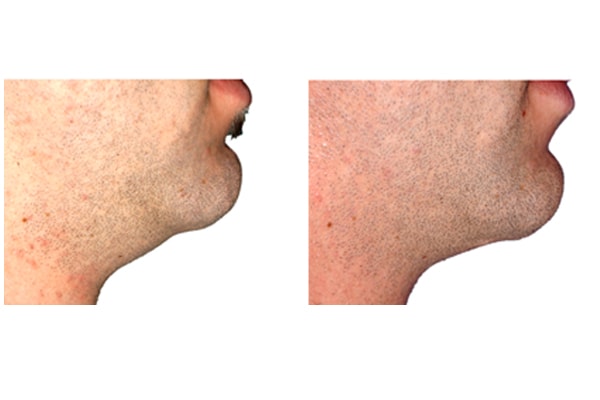 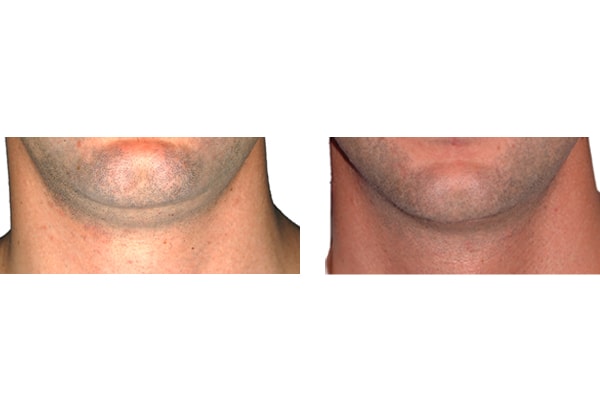 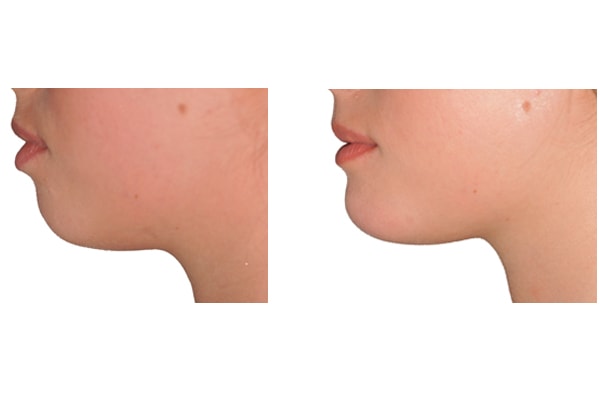 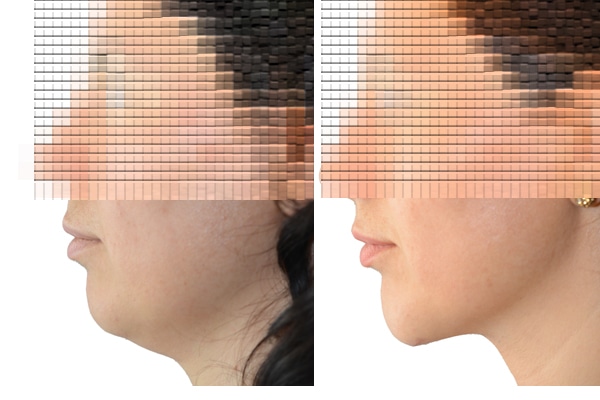 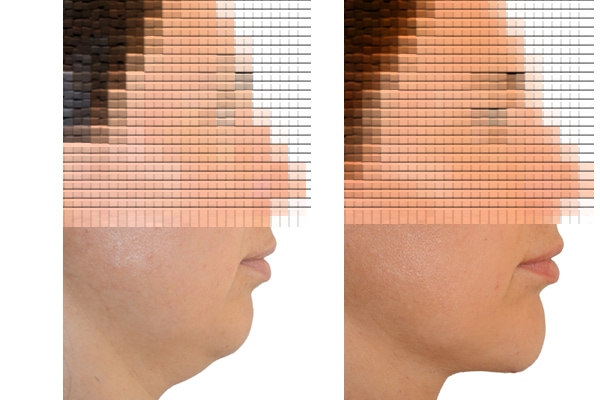 1. What is a chin correction?

A chin correction refers to the extension of a receding or reduction of a protruding chin.

2. What role does the chin play in facial harmony?

The length of the chin plays a crucial role in the harmonious picture of the face. Ideally, the most anterior point of the forehead and chin make a plane.

3. How is a receding chin extended?

A receding chin can be extended by an insertion of an anatomically shaped silicone implant if the deficit projection does not exeed 12 mm. More serious cases should be treated orthodontically.

Chin implants generally heal without any problems and are not be perceived as foreign.

5. How is a protruding chin reduced?

A protruding chin may be reduced by grinding. More serious cases should be treated orthodontically.

6. Can a chin correction be carried out jointly with a nose job?

Yes. It is a minor extension of the operation. A chin correction takes no longer than 30-45 minutes.

7. What effect does a chin correction have on a double chin?

The extension of the chin causes a simultaneous tightening of the neck, because this area is also extended. For further improvement of the neck contour a platysmal tightening can be carried out using the same access. Patients often want liposuction to correct a double chin, however, with a receding chin, this method is usually not sufficient.

8. Where is the skin incision?

Skin incision is either intraoral (i.e. via the mouth), or externally under the chin. The external access will be chosen if also a platysmal tightening is planned.

9. What complications can occur?

If the incision is placed outside, the scar remains below the chin approximately 3-4cm long. In the first months the scar may be slightly reddened and more obvious. In time however, it fades and becomes almost invisible. If surgery is performed through the mouth’s interior, the scar runs in the vestibule of the mouth below the incisor tooth of the jaw.

11. When is one “operational” after a chin correction?

Healing takes place, as with most operations, within 10-12 days. When placing an implant, swelling often lasts 3-4 weeks and may seem obvious. With the shortening of the chin the result is similar. In general, after 4-6 weeks there is nothing more to see.

12. What are the long-term results for a chin correction?

Long-term results are excellent in general. For chin augmentation with silicone implants, years after there could be a reduction of the jaw bone, which brings a slight reduction of the chin with it.

Chin correction surgery should always be performed in an ISO-certified operating room of a hospital.

Please note that the results may not be over 10 days old at the time of surgery. Please bring the X-ray and all the findings for surgery.

Aspirin, Thromboass and similar preparations should not be taken 14 days before the procedure. If necessary, a conversion to Heparin can take place.
Please come 2.5 hours before the procedure to the hospital on the day of the surgery and sign in with the porter. After completing the admission formalities you will be placed in your room. On request, you will receive an infusion, which reduces your thirst.

Enzyklopaedia Aesthetica, the patient guide for Aesthetic Surgery
Everything worth knowing about "Nose and chin correction".